Environmental DNA (or eDNA) is an emerging monitoring tool by which crayfishes, and other freshwater taxa, can be detected without a manager ever coming into physical contact with the target organisms themselves. Specifically, environmental DNA is DNA extracted from environmental samples (e.g., water) that can be used to infer the presence or abundance of species, sometimes with greater sensitivity than more traditional sampling methods (e.g., baited trapping of crayfishes). Environmental DNA has been used successfully to detect crayfishes from both lentic (e.g., Agersnap et al., 2017) and lotic (e.g., Ikeda et al., 2016) ecosystems, and the technique has been successfully applied to two invasive crayfish species known from the Great Lakes, the red swamp crayfish (Procambarus clarkii; Cai et al., 2017; Mauvisseau et al., 2017) and the rusty crayfish (Faxonius rusticus; Dougherty et al., 2016; Larson et al., 2017). However, one drawback associated with eDNA sampling is that organisms are not directly observed during eDNA surveys, so there is potential to falsely report the presence of target organisms based upon erroneous eDNA detections. Despite this shortcoming, techniques exist to help account for false positive eDNA detections, from both methodological and statistical standpoints (Schmidt et al., 2013; Ficetola et al., 2015). 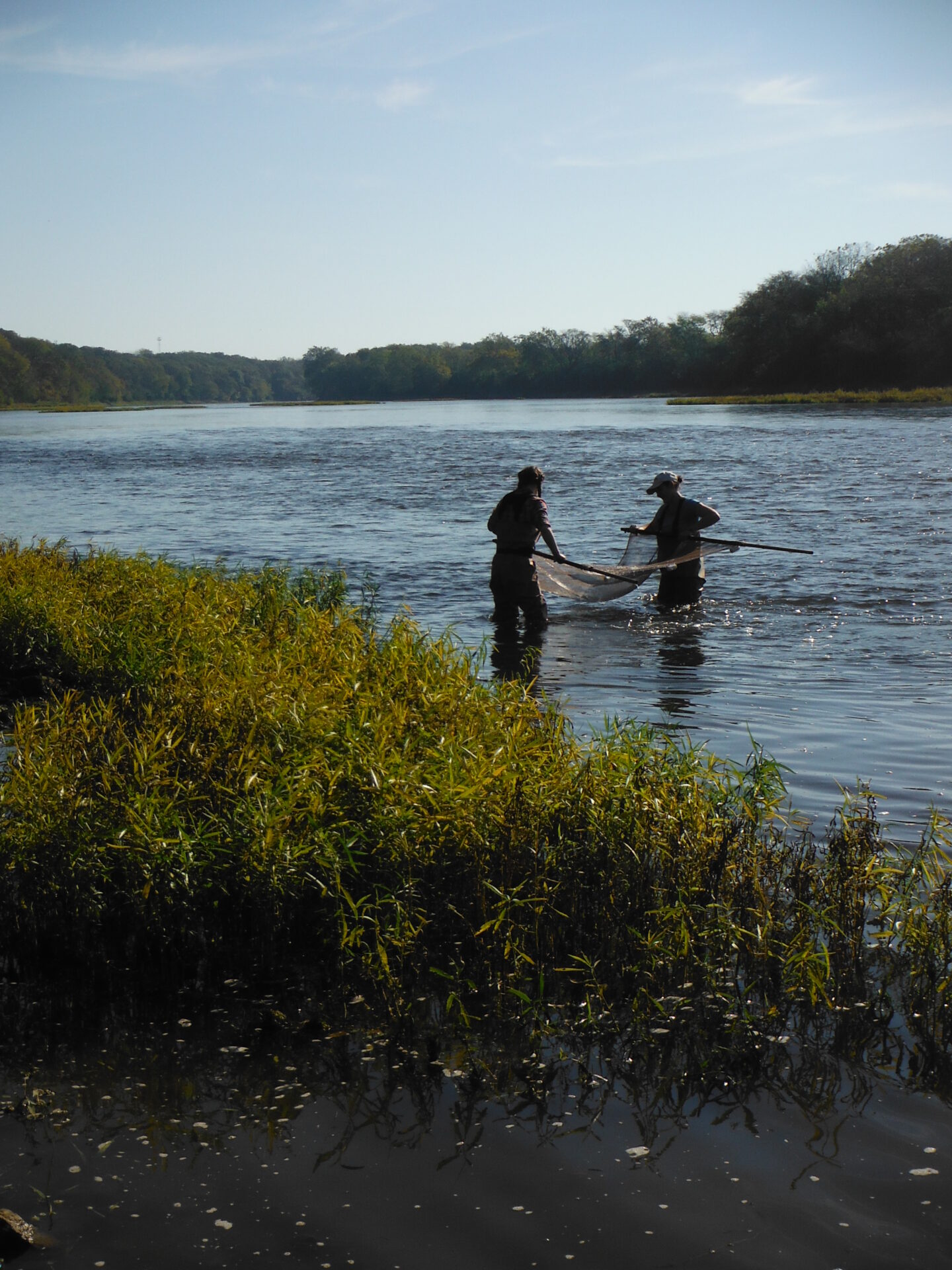 A common method used to collect and monitor crayfishes is netting with a mesh minnow seine. These types of seines used, and the methods by which they are deployed, can vary widely, but the basic principle of these methods remains the same. In order to be most effective, the mesh size of a crayfish seine should be fairly small, generally <4mm in diameter, and the bottom of the seine should be affixed with lead weights to minimize the potential for crayfishes to escape underneath the seine as it is pulled along the lake or stream bottom (Taylor et al., 2015). Seines are commonly used to collect and monitor crayfish populations in wadeable streams (Larson et al., 2008; Taylor et al., 2015; Engelbert et al., 2016), but the approach suffers one major drawback in that it the becomes increasingly difficult to implement in deeper habitats. A number of studies have successfully used seining to collect or monitor invasive crayfish populations (Magoulick and DiStefano, 2007; DiStefano and Westhoff, 2011), including the highly invasive rusty crayfish (Faxonius rusticus; Vollmer and Gall, 2014). Seining methods can also be modified to estimate crayfish density (Engelbert et al., 2016), which, if repeated in a routine manner, can provide beneficial information relating to the dispersal of invasive crayfishes or trends in their population densities. 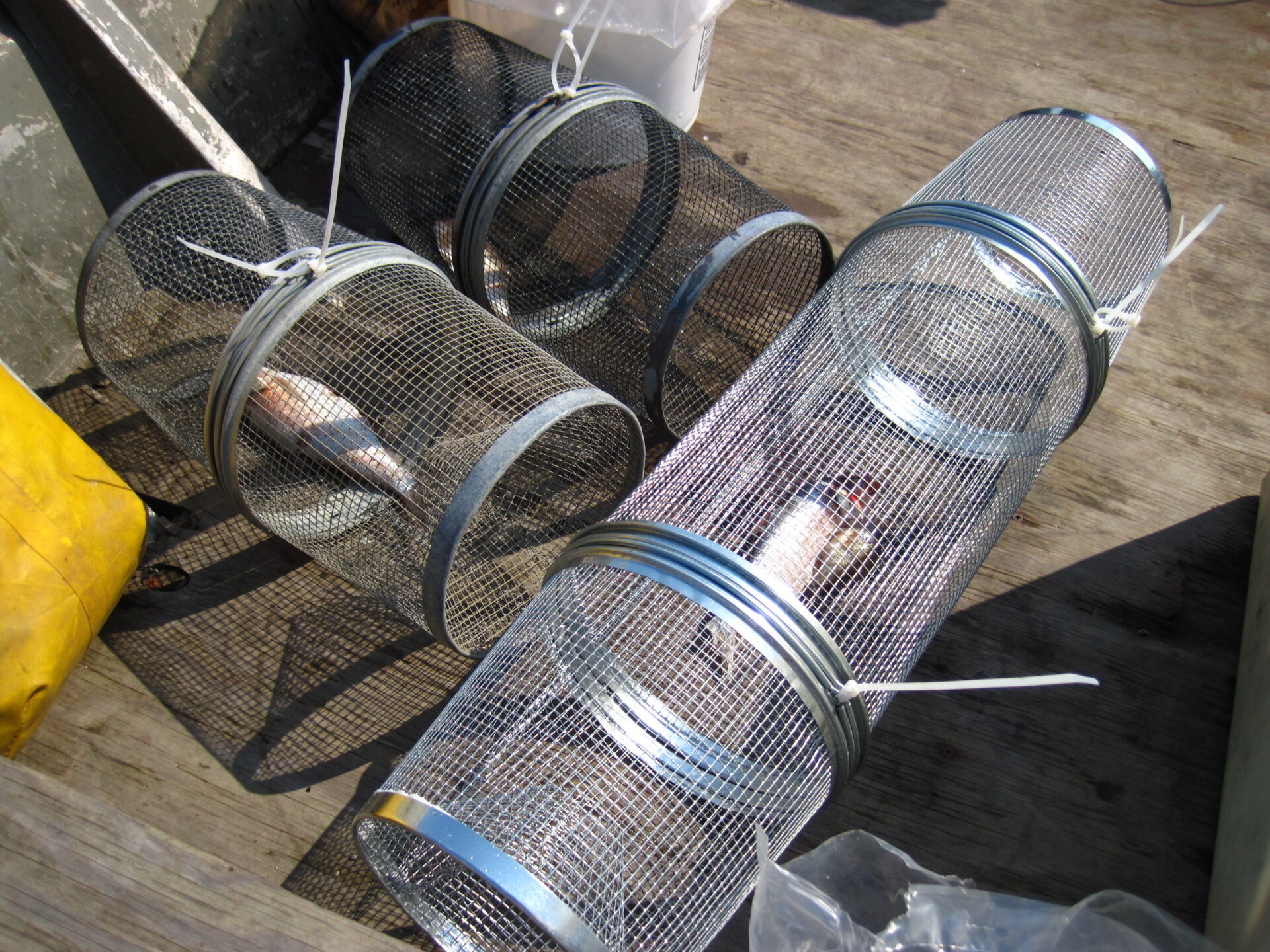 Crayfishes can be caught and collected with traps, with or without bait. However, the use of baited traps to collect and monitor crayfish is a common and popular practice, and many different trap designs and sampling methodologies exist (Fjälling, 1995; Romaire, 1995; Ulikowski et al., 2017). Baited trapping with wire minnow traps is frequently used to collect and monitor crayfishes in lacustrine habitats such as lakes, ponds, and reservoirs (e.g., Lodge et al., 1986; Somers and Green, 1993). These methods are also occasionally used to collect and monitor crayfish populations in lotic ecosystems (Kerby et al., 2005). Baited trapping has been used to monitor or remove invasive crayfishes from ecosystems in the Great Lakes Region on more than one occasion (Wilson et al., 2004; Hein et al., 2006). One potential limitation of baited trapping is that the bait type used may greatly influence the trapability of some crayfishes (Rach and Bills, 1987; Kutka et al., 1992; Somers and Stechy, 1986). Further, baited trapping of crayfishes is known to be biased towards larger individuals, particularly reproductive adult males (Stuecheli, 1991), and these limitations may be reflected by inaccurate population density or abundance estimates. However, baited trapping of crayfishes is simple relative to other methods used to collected crayfishes. 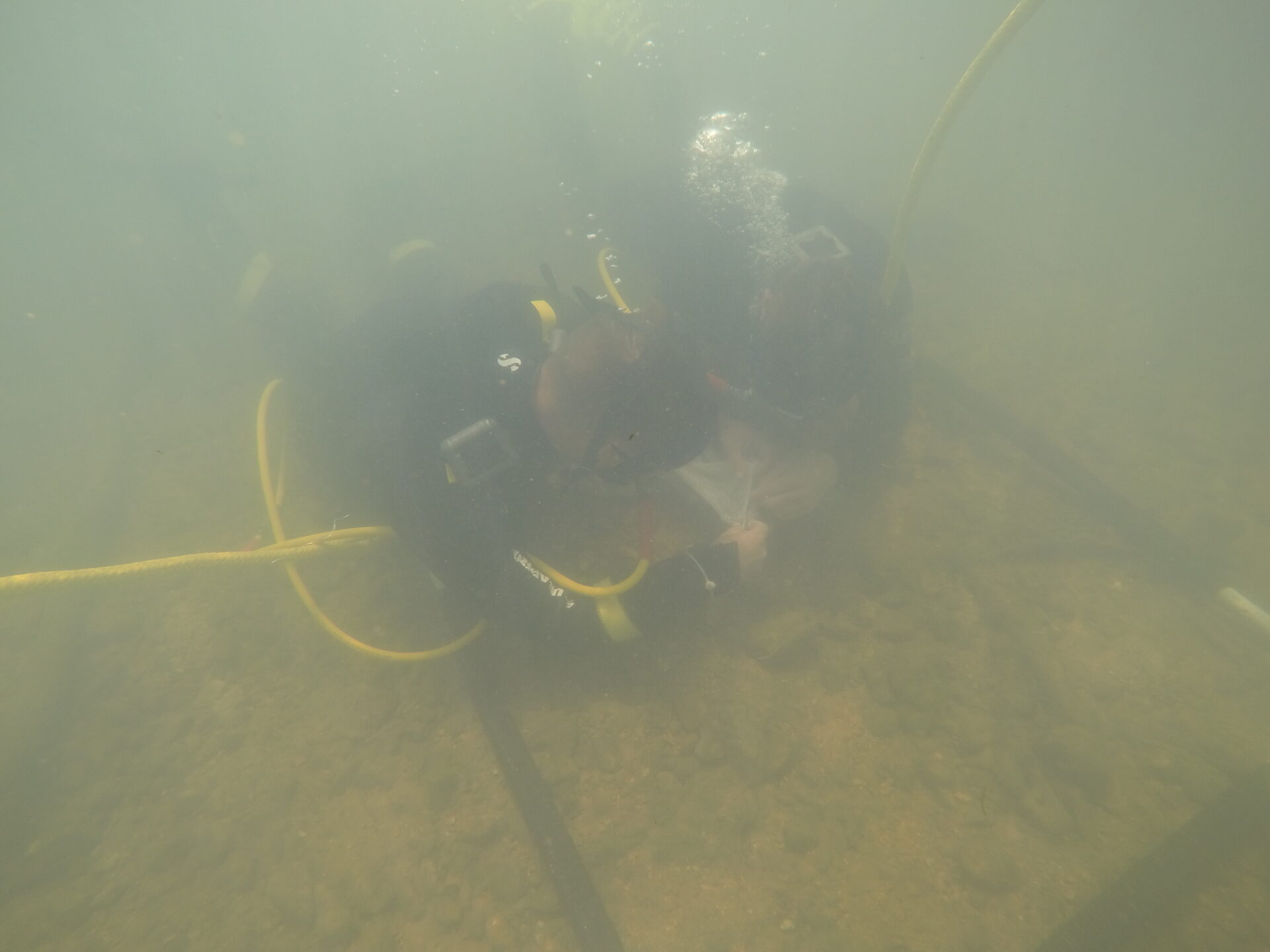 Underwater diving methods are occasionally used to sample crayfishes, both native and invasive. Scientists using these methods generally dive down to the bottom of the study ecosystem and collect crayfishes from beneath cover, such as rocks and woody debris, with their hands. A common and generally successful underwater crayfish sampling approach is SCUBA diving. SCUBA has been used to collect crayfishes from a variety of aquatic ecosystems, although most uses of the technique have been in lentic waters (e.g., Capelli and Magnuson, 1983; Somers and Stechy, 1986; Olsen et al., 1991). However, a handful of studies have used SCUBA to collect crayfishes from rivers and streams with success (e.g., Light et al., 1995; DiStefano et al., 2003; Stites et al., 2017). Snorkeling can also be used to sample crayfishes (Light et al., 1995) in both lentic and lotic habitats, although collectors using snorkeling are generally limited to sampling shallower areas where other monitoring tools like seines or traps could be equally effective. 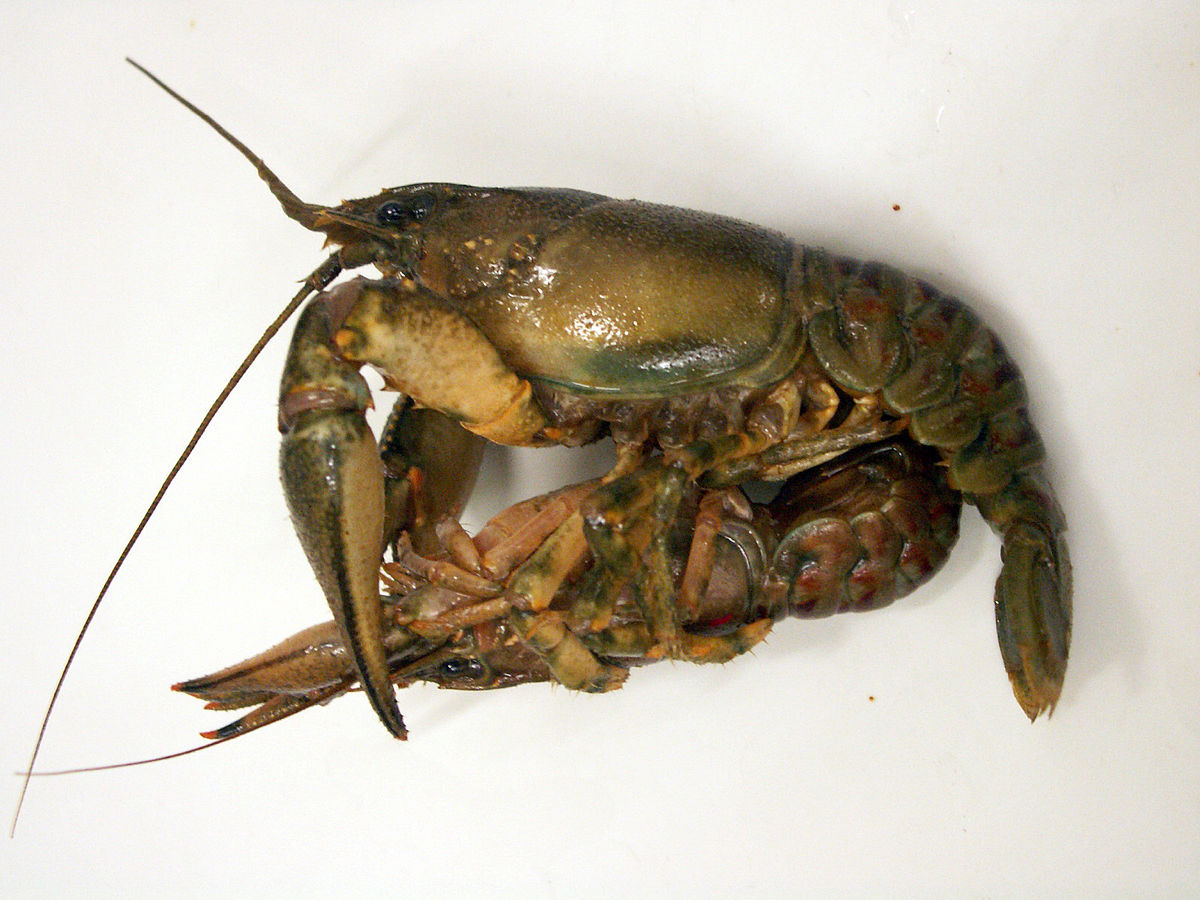 One method by which invasive crayfishes might be successfully managed is through the use of autocidal methods, such as through the release of sterile males (Gherardi et al., 2011). Sterile male releases involve the propagation and subsequent release of reproductively sterile males into the wild. The premise is that the sterile males will mate with viable, wild females, but the females will produce infertile eggs as a result of the male sterility. While these methods have proven successful in reducing the abundances of some insects (Balestrino et al., 2016) and aquatic vertebrates (Twohey et al., 2003), laboratory testing on crayfishes has been limited (Aquiloni et al., 2009), and it is uncertain if autocidal methods will be effective on established invasive crayfish populations with high densities. 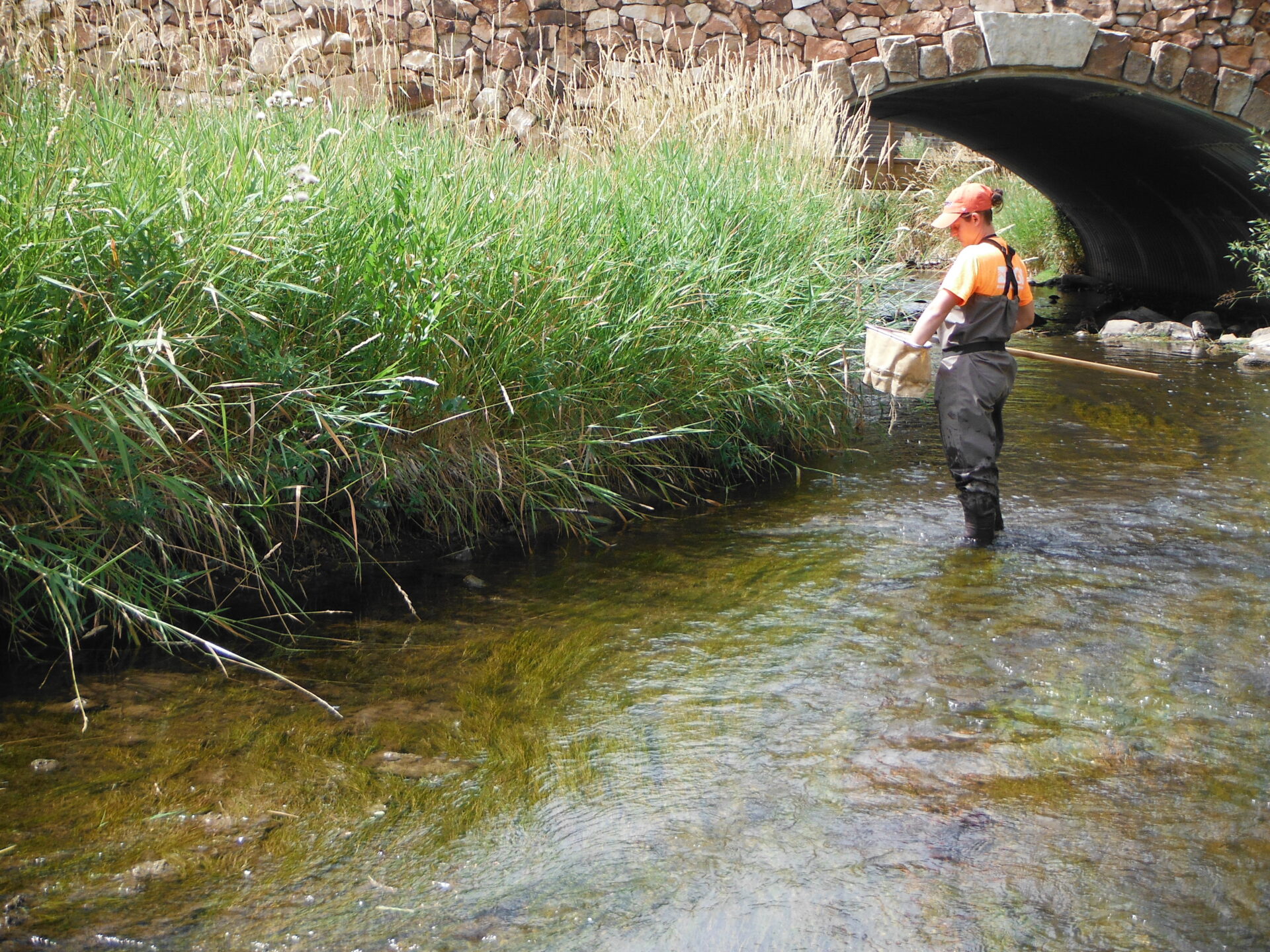 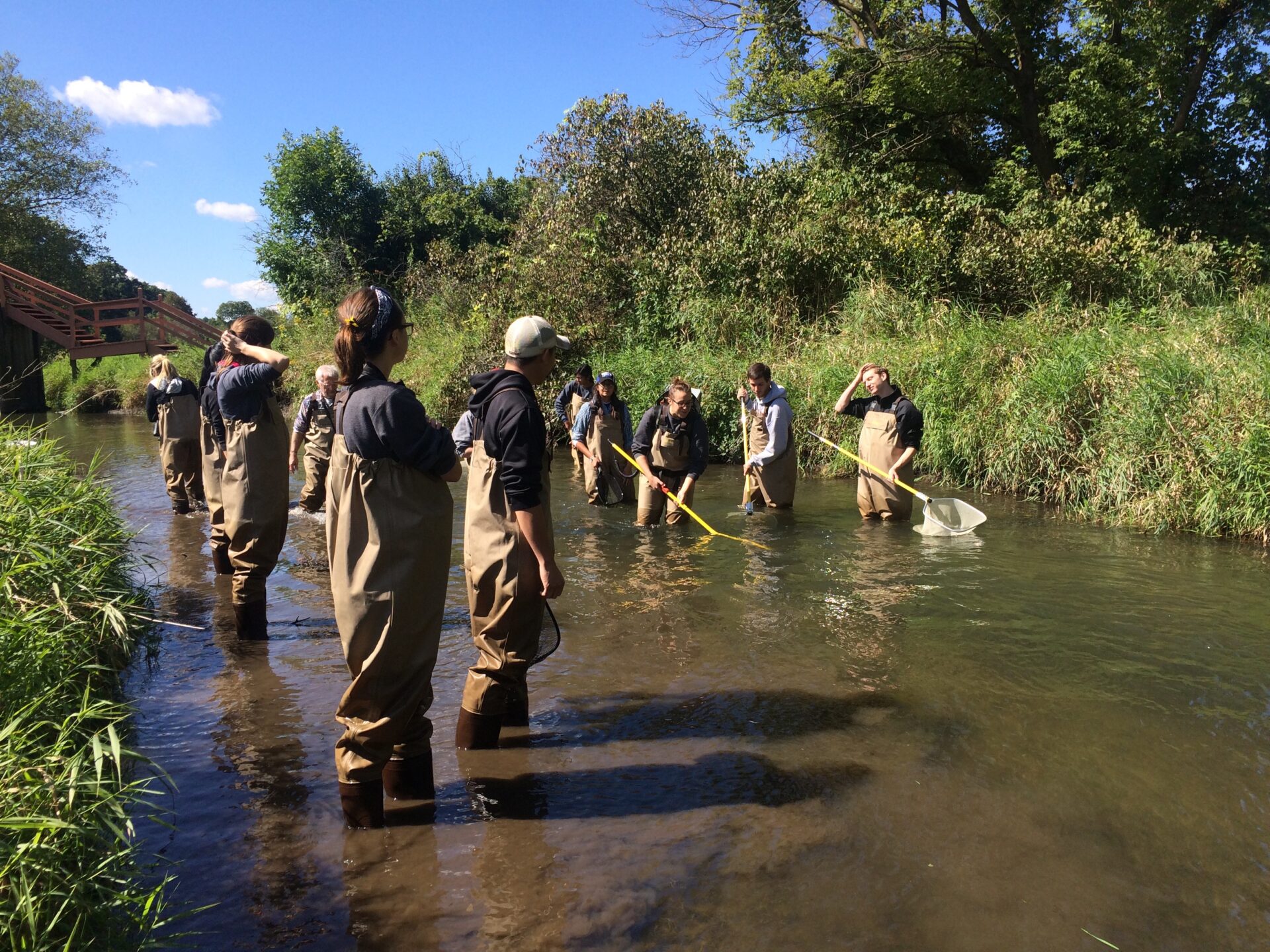 Electrofishing can be used to capture and remove invasive crayfishes from lakes, rivers and streams. However, the ability to effectively reduce or eradicate invasive crayfish populations via this method is unclear. Because crayfishes are generally associated with the bottom substrate, electrofishing becomes less effective at greater depths, making the method impractical for large lakes and rivers (Westman et al., 1978). Crayfishes may also seek cover in burrow or underneath large substrates, allowing them to potentially escape the electrical field generated by an electroshocking device (Westman et al., 1978). However, this effect may be somewhat less pronounced in small, shallow streams than in other aquatic habitats (Rabeni et al., 1997). 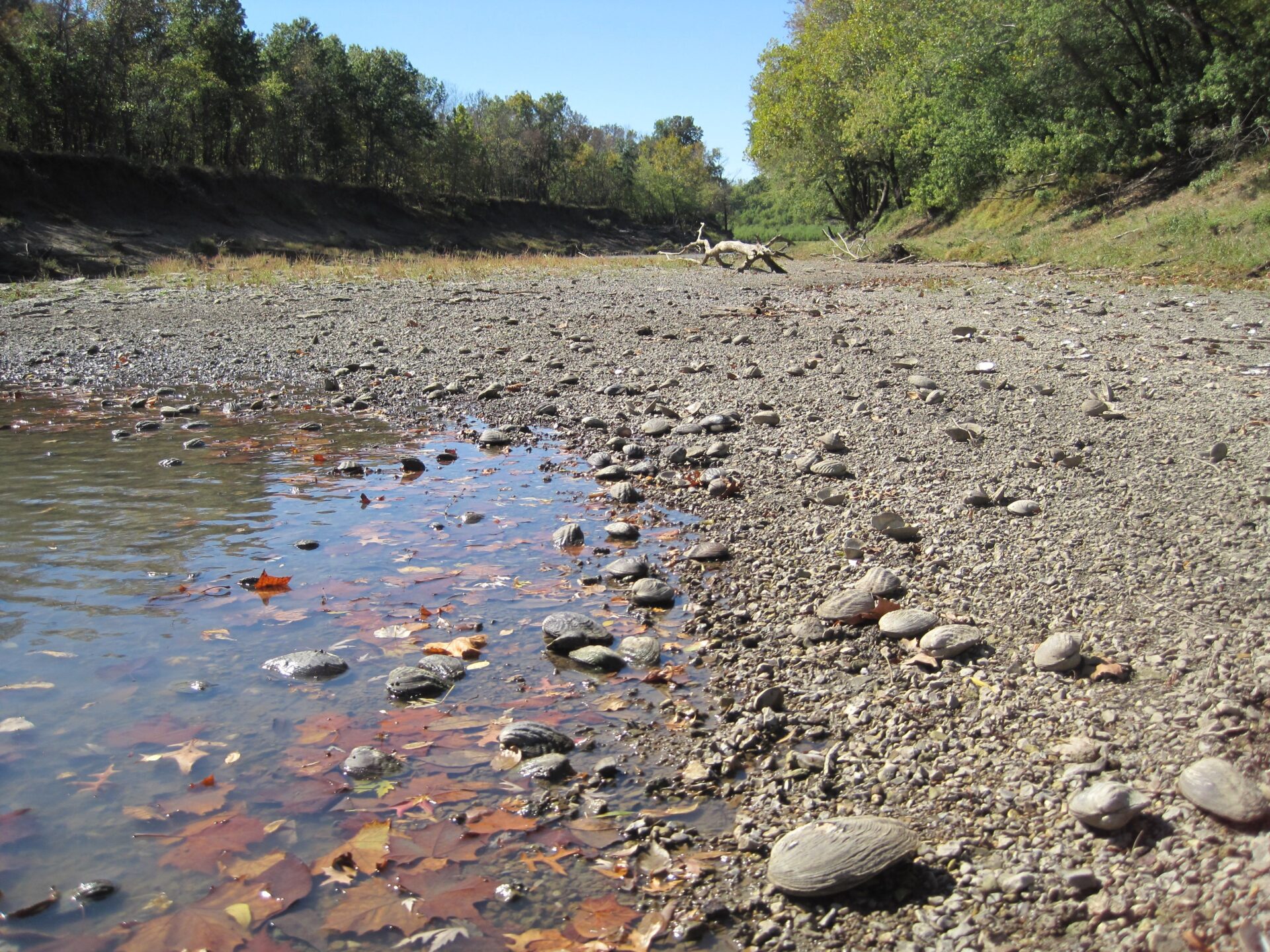 Drainage or capping of waterways

Draining and capping water bodies infested by invasive crayfishes are other methods by which they might be eradicated or reduced to a manageable level. Studies attempting to drain or divert water from a waterbody to manage invasive crayfish are rare, most likely due to their costly and time-consuming nature. Many crayfish species also possess the ability to burrow down to the water table when water becomes scarce (DiStefano et al., 2009; Kouba et al., 2016). This tendency can reduce the effectiveness of draining ponds or diverting rivers and streams to control invasive crayfishes, and as a result, such methods have been largely ineffective (Gherardi et al., 2011). The Wisconsin Department of Natural Resources demonstrated that red swamp crayfish (Procambarus clarkii) can be successfully eradicated by filling in a water body and by creating permanent physical barriers along a shoreline (Bunk 2018). 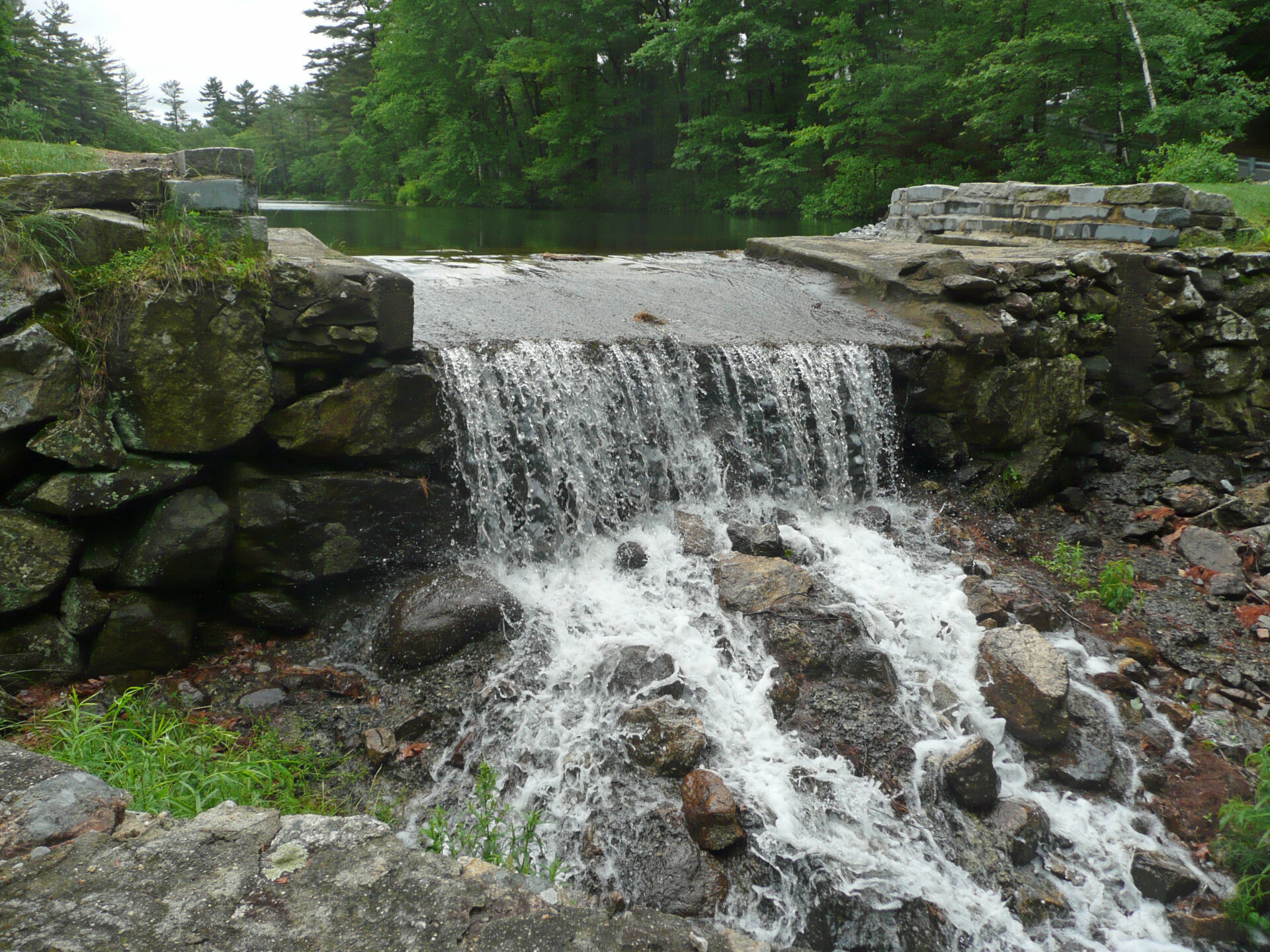 Artificial barriers constructed in rivers and streams are also a potential method to prevent or reduce the spread of invasive crayfishes to upstream locations in stream networks. Such methods generally involve the construction of concrete barriers (i.e., artificial waterfalls) in the stream channel that maintain stream flow, yet prevent crayfishes from walking or swimming up the barrier. These methods have thus far shown mixed results (Kerby et al., 2005; Gherardi et al., 2011), and they may be most effective when used to control isolated or confined invasive crayfish populations (Gherardi et al., 2011). Control methods proposed for invasive fishes, such as electric or carbon dioxide barriers, may be one avenue to explore for invasive crayfish control.

The lay community can play a fundamental role in preventing, managing, and helping scientists learn more about biological invasions. These “community scientists” can greatly influence our understanding of invasive crayfishes by reporting new invasions or by documenting the spread of existing populations. Community scientists can also play a central role in disseminating information relating to invasive crayfishes to members of the public that are not often easily reached by professional scientists.

Illinois-Indiana Sea Grant will be training community scientists to monitor crayfish at state and national science teacher conferences. Information and tools used at these conferences will be posted when available.